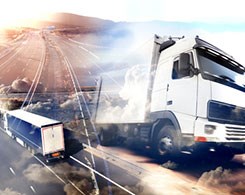 In 2002, a long-standing agriculture haulage partnership based in Lincolnshire became a limited company.

Initial trading was good and they continued to show profit. This lasted until 2009 when the recession began to take its toll on the haulage industry. Significant increases in the price of diesel predominantly, but also in other variables such as tyres, insurance and maintenance, caused the company to struggle.

By 2010 cash flow was impacted to the point where the company began to fall behind in its liabilities to HM Revenue & Customs (HMRC). The now current director, paid the HMRC debt and also began to pay off small amounts of other historic debt. Until the summer of 2012 this worked well, when the company cash flow was interrupted by two customers going into liquidation.

Strategic endeavors by the director followed: reductions to overheads, improvements in efficiency and a HMRC Time To Pay arrangement. However, in 2015 an unexpected downturn in business meant payments to the HMRC became difficult.

The director approached Greenfield as he was confident his company was viable. Going forward he would further reduce the fleet and maintenance by keeping newer vehicles and longer term, move to contract hire. Further, pro-active marketing would also occur, of which there were already early indications of success.

Greenfield worked with the director to find a solution. The outcome was a company voluntary arrangement (CVA) lasing 60 months and providing a partial repayment of creditor claims.

If you think you may benefit from a company voluntary arrangement, take advantage of the wealth of insolvency experience that we have to draw upon to help your company.  From general business advice, through to re-structuring, financing or raising new capital -  we can help you.  Call 0121 201 1720 or Send us your concerns.

CVA
CVA
HMRC Time To Pay
Choice of Insolvency Practice
How Can We Help?
Free advice & no obligation. Call, chat online or contact us below.